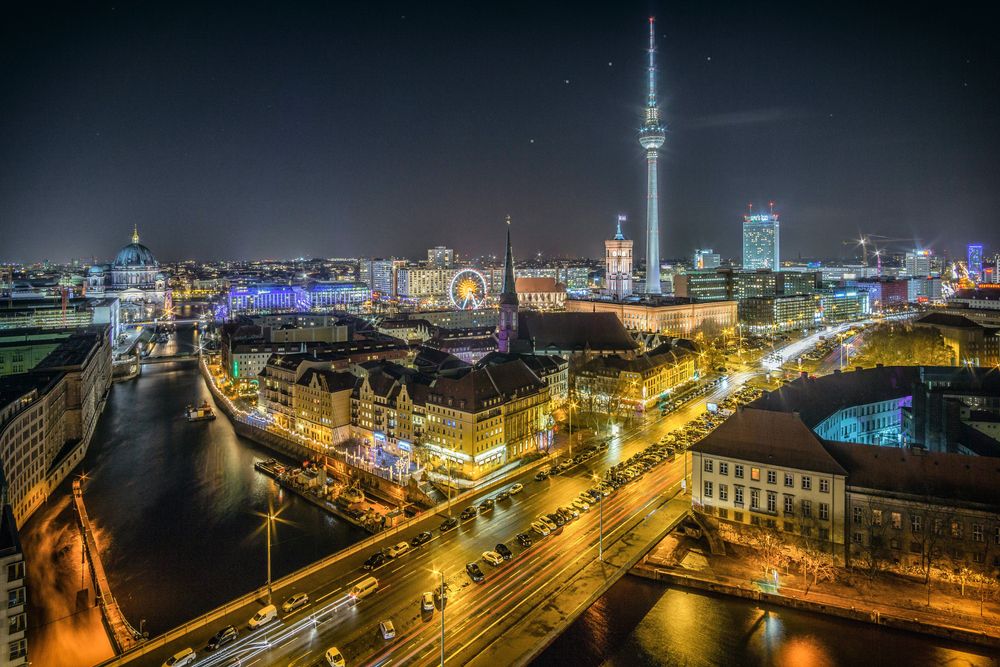 The city has developed a lot in recent decades, especially from a cultural point of view. In addition, the much lower prices compared to other western cities have convinced a lot of people from all over the world to come and live in Berlin. So, here is a good reason to put the German capital on the list of your destinations, having great chances, we say, to fall in love with this city.

To visit Berlin properly you need at least a whole month, but we have compiled a list of some places that we recommend for a city break of 3-4 days.

We start with the largest and, implicitly, the most famous public market in Berlin, which is also an important node in the city's transport infrastructure. From the cattle market as it was in the beginning, Alexanderplatz, became in time what it is today and received the name in honour of Tsar Alexander I who visited the city at the beginning of 1800s.

Today, the square is surrounded by imposing buildings, built after the World War II, because, as it happened in other German cities, everything was destroyed. Thus, Fernehturm, the famous television tower, 368 meters high, the pedestrian area, Weltzeituhr or World Clock, but also many shopping centres make Alexanderplatz a main tourist attraction.

Located in the middle of a very large roundabout, Grosser Stern, the statue was built to celebrate the Prussian-Danish War.  As the completion of the works took a little longer, and in the time that elapsed there were some conflicts that ended in victories, the statue somehow celebrates them all.

Although not part of the original plan, which provided only a column, the statue of the goddess Victoria, sculpted by Friedrich Drake, was added later. The tower has a staircase inside, with no less than 270 steps to the top, open today to the general public.  As such, if you feel able, you can climb to the top, but be prepared - not only physically, but also mentally - because it is not easy to handle so many stairs, that are in a spiral. The panorama, however, is fabulous and well worth it. The ticket costs 3.00 euros for adults, respectively 2.50 euros for concessions.

Berlin Wall with East Side Gallery

This is, perhaps, the most important symbol of the Cold War and of the barrier that stood between the two German republics, the federal one, in the west, and the democratic one, in the east. After almost 28 years of existence, the wall was demolished in November 1989, following mass demonstrations against the Eastern government.

The wall was almost completely destroyed, leaving very little of what it once was. The longest preserved section is called the East Side Gallery, which is also the largest open-air gallery in the world.

You must not miss Checkpoint Charlie, the place where you could legally move from one Germany to another. Basically, this was the border point, but also a painful symbol of separation.

Due to the name of the huge lime trees planted in the 1600s and connecting the gates of Berlin to the City Palace, the boulevard is also the source of inspiration for those who designed other famous boulevards, such as the Champs Elysées in Paris.

At its end is the Brandenburg Gate, one of Berlin's most powerful symbols, where, over time, significant events in German history have taken place. The gate was built on the site of another gate, which in the past represented the beginning of the road that connected Berlin to the city of Brandenburg an der Havel.

In 2005, on the sixtieth anniversary of the fall of the Nazi regime and the end of the  World War II, this memorial was inaugurated, the construction of which is meant to always remember, over time, the death to the more than six million jews during the Nazi regime.

Built on the site of a former airport, the park is today a place of recreation for which the Berliners had a bit of a fight with the authorities. It seems that, initially, this space was intended for the army, as a place for parades and military exercises, so that, on weekends and national holidays, it was invaded by the population to spend their free time.

Only later was the airport built, but in 2008 it ceased operations. Well, at this point, the city has claimed over 300 acres of land, so Berliners are once again enjoying the old recreation area by biking, picnicking, paragliding or lots of other outdoor activities.

A walk in this area will reveal another side of unconventional Berlin, with factories used as spaces where art exhibitions or urban events are organized. Also here you will eat, if you are passionate about local cuisine, the best currywurst in town at "What a wurst!".

One attraction you should not miss in Berlin would be the flea markets. You can find here everything you want and what you don't want: from food of all kinds to precious antiques, and even to all kinds of old and very old trifles that you can buy at convenient prices if you put your negotiating spirit to the test.

The famous currywurst I told you about above, but also one of the best burgers in town, probably even the best, can be found on the site of a former public toilet. Don't raise an eyebrow, that's right. It's called Burgermeister, in Kreuzberg, and they make an absolutely delicious burger here.  So delicious that the world is crowded like the holy relics, not another, so you will have to wait in a generous queue, with a promissory note. The prices are really decent and the taste is sensational.

Berlin is known as a city that doesn't sleep much. If during the day it is very lively, then during the night it becomes explosive, and this is due to the numerous parties with music of all kinds - traditional, jazz, electronic, for all tastes, but always live music.

If you arrive in Berlin, don't miss the nightlife and don't miss the famous beer gardens, music terraces, festivals, clubs and all those places that make the city so lively.