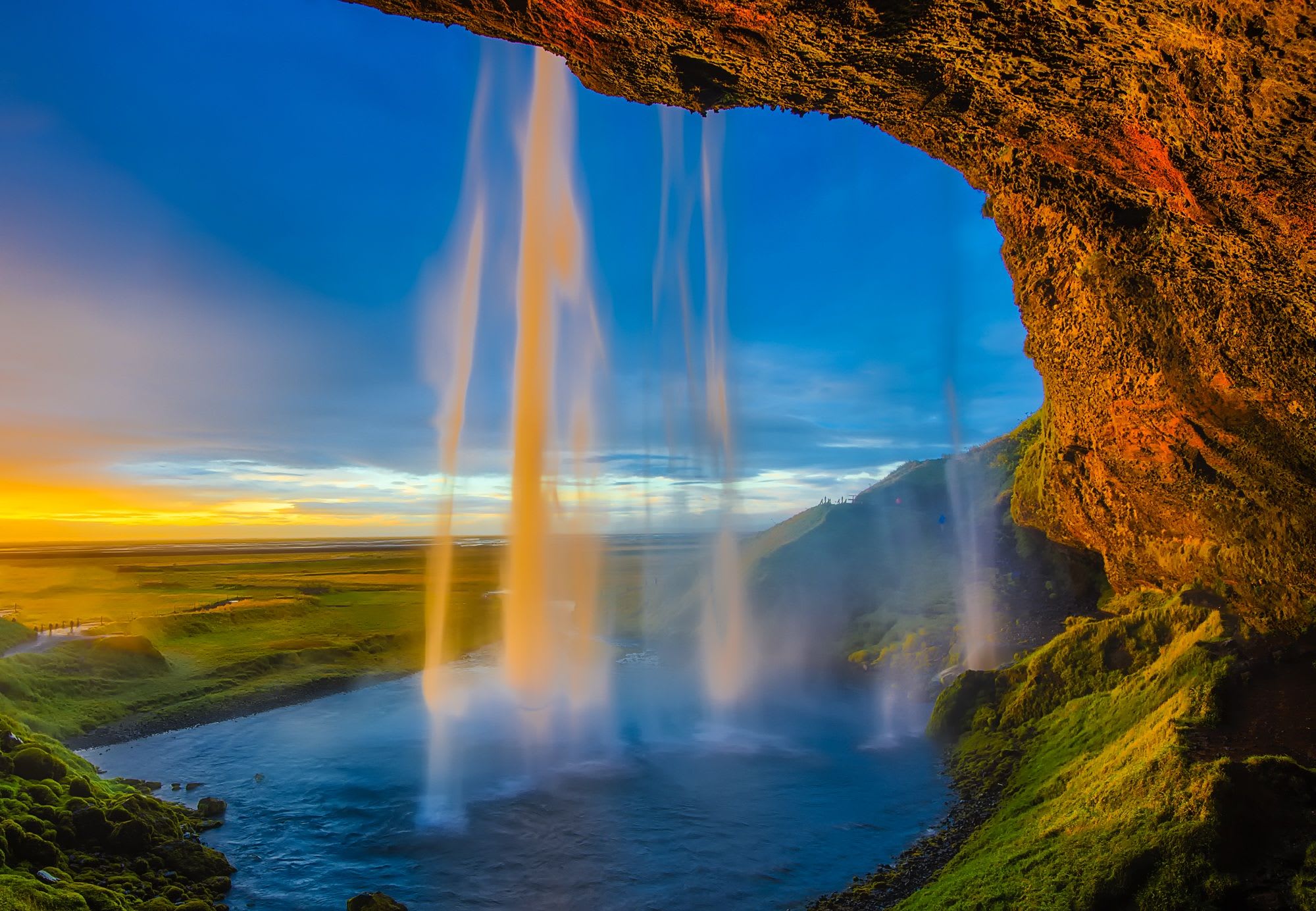 I invite you to a self-drive itinerary to discover Iceland, a unique island with an unusual culture, "the Land of Fire and Ice". You will venture into the vibrant city of Reykjavik, the northernmost capital of the world, and explore the amazing natural wonders of the island: the famous Golden Circle route, countless spectacular and different waterfalls, Akureyri - the capital of northern Iceland, the picturesque Lake Mývatn, Vatnajökull and Thingvellir National Park and many more.

Best time to visit Iceland: June - August; This is the prime and of course the busiest time to get the see as much as you can of this unique landscape because it never really gets dark, winds are calm, storms are fewer, is peak season for whale spotting and trekking opportunities are infinite.

Take a walking tour of Reykjavik and admire the main attractions of the capital: the Sun Voyager (Sólfar) sculpture, the Parliament building, the cathedral, the port, the Harp Concert Hall and the representative colourful houses from the central area. Reykjavik is the largest urban center from Iceland and also the northernmost capital of the world, with a population of about 130.000 inhabitants. The atmosphere is lively: the buildings painted in bright colours, the creativity of the Icelanders manifested in the most unexpected forms, the numerous restaurants and cafes give a special charm to the city.

Hallgrímskirkja is the largest Lutheran church in Iceland. It impresses with its unique, expressionist design. The construction took 41 years, being completed in 1986. From the church tower you can admire the beautiful panorama of the city, the height being 74.5 meters.

This on the most popular tourist route in Iceland - Golden Circle, where you will discover some of the most famous natural attractions of the country, including Gullfoss Waterfall - also called the Golden Falls; the famous Geysir - the geyser that gave the name to all of the streams this kind; Strokkur, another geyser that erupts every 5-10 minutes and Thingvellir National Park, enlisted on the UNESCO World Heritage List, a picturesque place representative of the history of Iceland. Thingvellir is the meeting place of two tectonic plates: the North American and the Eurasian. In this natural amphitheater, meetings of the oldest parliament in the world, Althingi took place - being considered the starting point of Icelandic democracy.

Don't miss out! Take your lunch or dinner at Friðheimar, where the main theme cuisine is tomatoes grown local at their own greenhouse and cooked in different forms. Beside taking a meal, here you can also watch a horse show, that is contained of Icelandic horses with six first-prize broodmares.

The route from Reykjavik to Akureyri covers the western part of the island and is famous for its fjords, volcanoes and valleys. Most spectacular waterfalls are Barnafoss and Hraunfossar, which spring from lava fields and whose water curtains stretch over a considerable width. Deildartunguhver is the largest thermal spring in Europe, with a flow rate of 180 liters/second and the water has 100°C temperature. Nearby is the Grábrók volcanic crater, whose silhouette you can admire along the way to Akureyri, the northernmost city of Iceland.

Exploring the Troll Peninsula - Tröllaskagi, you will be amazed by its fjords, cliffs, hills and picturesque fishing villages. Continuing to Husavik, the northern coast of Iceland, you must stop at Siglufjörður, once the most important herring fishing center in Iceland.

Herring Era Museum is the only one in Iceland awarded at European level. Herring fishing has played an important role in the country's economy over time. In 1969, production fell sharply due to unsuitable overfishing and environment variation, leading to the bankruptcy of the entire area. During the visit you are be able to taste some local specialities.

From here, you can go to Godafoss Waterfall or "Waterfall of the Gods", which is impressive by its dimension, 12 meters high. The waterfall flows in a semicircle, being formed on the river Skjálfandafljót.

Don't miss out!!! From the coastal port of Husavik, you can embark for a short whale watching cruise. Husavik is in fact the most popular starting point for whale watching in Europe.

Visit the awe-inspiring Jökulsárgljúfur National Park, Lake Myvatn and Dettifoss Waterfall and then travel to the east coast of Iceland until you reach Egilsstaðir, on the shores of Lake Lagarfljót.

Cross the Jökulsárgljúfur Canyon, with a length of 24 km and a depth of about 100 m and you will discover the most spectacular views on the island. Also here is the horseshoe-shaped Ásbyrgi Canyon, "Shelter of the Gods", a place often evoked by Icelandic legends. As a result of water, ice and fire erosion, each year the canyon fascinates tourists from all over the world, both through its dramatic landscapes and the diversity of fauna and flora.

The most powerful waterfall in Europe, Dettifoss, with a flow rate of 193 m²/s and is inspiring with its moon landscape shrouded in steam between Námaskarð and the area of ​​Lake Myvatn. Also here you can reach the active Krafla volcano, with a diameter of about 10 km and check out this geothermal region which is dotted with numerous hot sulfur springs, fumaroles and muddy volcanoes.

Day 6: Visit the fishing villages on the way to Hofn

Today it's all about admiring the picturesque fishing villages scattered among the eastern fjords of Iceland, on the way to Hofn, the final destination of the day.

Stop at Stodvarfjordur to visit one of the most popular attractions in the area: the museum opened by Ljósbjörg Petra María Sveinsdóttir in 1974. Passionate about stones, rocks, shells and shells, Petra has collected an impressive and varied number of pieces throughout her life, which are exhibited in his own garden.

Admire the beautiful landscapes of Vatnajökull National Park dominated by the the largest glacier in Europe with the same name. The Skaftafell area is one of the most vivid in Iceland. Here you can see basalt columns, glacial rivers and specific vegetation. At the end of tour you will be able to photograph the spectacular Fjaðrárgljúfur Canyon.

Don't miss out the shores of the Jökulsárlón glacial lagoon, one of Iceland's natural wonders, on which blocks of ice floating from the glacier float, and of course the scenic Diamond Beach, dotted with pieces of ice that shine in the sunlight.

Day 8: Explore the attractions near Vik

Take walk on the black sandy beaches of volcanic origin near Vik and admire the Reynisdrangar basalt columns, which rise from the ocean water, and the Dyrhólaey promontory, with its spectacular arch.

Continue your journey to Skogafoss waterfalls, whose waterfall measures 60 meters high, and Seljalandsfoss, which latter is more special because it allows access on a path to the back of the water curtain.

Visit also Skogar Museum, which has an important collection of cultural heritage of over 18,000 exhibits and was opened in 1949. This visit will reveal interesting things about the traditions and history of Iceland, fishing, agriculture, local crafts, but also natural history.

Don't miss out! Stop by the famous Blue Lagoon, one of the most photogenic attractions in Iceland and also a unique ecosystem in the world, a true laboratory of nature. The lagoon salt water is originated from 2000m depth, and on the way to surface it comes in contact with magmatic intrusions, capturing minerals and resulting in a natural geothermal water, famous for its healing qualities.