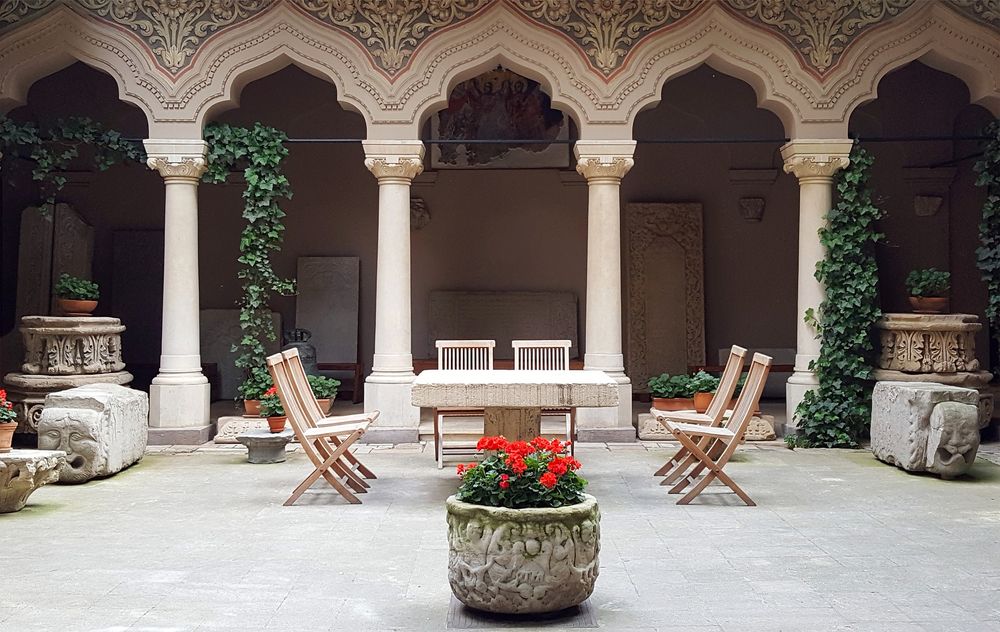 One of the most important attractions in Bucharest is certainly the Old Town. Here are some of the most fascinating and important buildings in the city, but also restaurants, bars, cafes, clubs, places of relaxation, entertainment, shopping, places of culture and art.

All this top 10 attractions can be discovered on foot, in a couple of hours of romantic walk through historical Bucharest, let's check them all!

Covered mostly with yellowish glass, Macca-Villacrosse is probably the most elegant passage in Bucharest. Built in the shape of an elongated horseshoe, it consists of two branches that start from Calea Victoriei and that join near the exit of Eugeniu Carada Street.

The main purpose of the passage was to create commercial spaces on the ground floor and at the same time to connect the National Bank, located on Lipscani, with the other important artery of the city, Calea Victoriei. Between years 1960-1980, Macca-Villacrosse was also called the Jewel Passage.

Located on Calea Victoriei, the CEC Palace is one of the most beautiful buildings in French Baroque style, and also an emblematic building of the capital. The building known as the Palaca of the House of Savings and Consignments was built between 1896 and 1900, according to the plans of the French architect Paul Gottereau, and located on the site of the former monastery of St. John the Great.

It was built mostly with Romanian materials: solid stone and Dobrogea marble. Of the five domes, four are symmetrical, and the middle one, made of glass, covers the central hall. The counters operated in the palace for almost a hundred years - from 1900 to 1999.

Built in Brancoveanu style and dedicated to the Archangels Michael and Gabriel, the Stravopoleos Church is distinguished by its shape and colors still alive. The name is the Romanian form of the Greek word Stauropolis (City of the Cross).

It was built in 1724 by Archimandrite Ioanichie Stratonikeas. From the inn revenues, he built a church and a monastery in the same courtyard. As was the case at the time, some of the local proceeds went to support the place of worship. Elected in 1726 metropolitan of Stavropole and exarch of Caria, Ioanichie named his foundation in Bucharest - Stavropoleos.

Of the old ensemble, only the church remains, the rest of the buildings being demolished. A newer body, dating from the early twentieth century, still houses a library, a conference room, a collection of old icons and objects of worship. Fragments of frescoes from churches demolished during the communist regime were saved and brought here.

After the establishment of the National Bank of Romania, the institution needed its own headquarters. Thus, the land on which the Şerban Vodă inn was located, the main inn of the city, was purchased, due to its size, which was demolished to make way for the old BNR palace.

In 1882, the project of the French architects Albert Galleron and Cassien Bernard was approved, in which the facade was on Lipscani Street, being rejected the one that provided a facade on Smârdan Street. The deadline, year of 1889, also inscribed on the façade with Roman numerals, was much exceeded, especially due to the works inside. It is an eclectic style building, richly decorated on the outside with statues and columns, and on the inside with paintings by G. D. Mirea, Nicolae Grigorescu etc.

On Lipscani Street there is not only the BNR Museum, but also the foundations of the royal construction of Şerban Cantacuzino, covered with large glass panels, in front of and even under the facade of the old building of the National Bank.

The lion-headed building in Calea Victoriei was originally the headquarters of the Central Post Office, built between 1894 and 1900. The project was made according to the plans of the architect Alexandru Săvulescu. He visited post offices in several European countries, and the one that is said to have inspired him the most was the one in Geneva.

In 1968 the building became the Museum of National History of Romania. It hosts over 3000 exhibits of metals and precious stones, gold and silver treasures discovered in Romania and dating back to ancient times - coins, weapons, harness, etc. Among the most important pieces are the treasures discovered at Pietroasa and Apahida, cult objects and jewels of the rulers, as well as the royal crowns worn by Carol I and Ferdinand I or the Queens Elisabeta and Maria.

The lapidary houses at the lower level the natural scale copy of Trajan's column from Rome, and at the upper level - pieces of marble, limestone or sandstone, dating from the Greco-Roman period, the late Roman era and the Romanian Middle Ages.

The oldest historical testimonies in Bucharest are kept in the Old Court Museum. The history of the royal residence is linked to the names of important rulers: Mircea the Old, who in the opinion of researchers is the founder of a first fortress with brick walls at the end of the 14th century, and Vlad Tepes, who consolidated the fortress and raised it to the rank of royal residence , in parallel with the one in Târgovişte.

Other voivodes - from Matei Basarab to Constantin Brâncoveanu - also rebuilt and expanded the courtyard, the main building, the guards, the watchtower and the bathrooms. During the latter, the palace experienced its greatest flourishing, occupying 25.000 square meters next to the gardens. In 1775 it was abandoned, Alexandru Vodă Ipsilanti moving his residence to Curtea Nouă, new streets and neighborhoods being built on the old perimeter.

Only in 1967 did the archaeological excavations led by Panait I. Panait and Aristide Ştefănescu begin. It was one of the largest archaeological investigations in Bucharest: streets were uncovered, houses were demolished, numerous excavations and consolidation, completion and restoration works were carried out.

The museum was arranged until 1974 and preserves fragments of walls from the reign of Vlad the Impaler, along with the foundations of the first residence from the 14th century.

The oldest church preserved in Bucharest, founded by Mircea Ciobanul during his first reign, between 1545 and 1554, is the Old Court Church, dedicated to the Annunciation and St. Anton. The Serbian-style trefoil building was influenced by the church of the Cozia monastery. On the other hand, for the first time in Wallachia, the buttress with a constructive role, of Moldovan influence, was used.

The place of worship of the royal court hosted for two centuries (XVI - XVII) the main religious events, from services to the coronations of the rulers of Wallachia. The church was built on the site of an older one, built of wood. The most important transformations of the place were made during the reign of Ştefan Cantacuzino. The beautiful stone-carved portal also dates from that time.

The church underwent several stages of restoration: in 1847 it was affected by the Great Fire (the fire that destroyed a quarter of Bucharest), but within five years it was renovated, taking over the patron saint of the neighboring church. The original architecture was restored following general restorations undertaken between 1928 and 1938.

One of the few inns that has been preserved in its original form in Bucharest is Manuc's Inn, located across the Old Court Church, in St. Anton Square. Emanuel Mârzaian, as Manuc was actually called, was born in Rusciuc, in 1769. The rich Armenian merchant came from a family with origins in the village of Karpi, Ararat region, he spoke no less than 12 languages, and his intelligence and ability they helped amass a fabulous fortune. Manuc Bei settled in Bucharest in 1806, due to the Russo-Turkish war, and soon the construction of the inn began.

The architecture of the building was innovative, differing from the old inns-fortresses especially by the beautiful porches supported by wooden pillars, which are supported by equally beautiful arches that guard the inner courtyard and are spread along the entire length of the walls.

In the basement there were 15 vaulted cellars, on the ground floor there were 23 shops, two large halls, 10 warehouses, to which were added the servants' rooms, the kitchens and a tunnel that could hold about 500 people. Upstairs were 107 rooms, most of which were reserved for guests. In the inner courtyard there is a café and a garden with an artesian well.

9. Pedestrian streets with cafes and restaurants

From The Old Court Church, go to Smardan Street, where a view reminiscent of Little Paris awaits you: dozens of cafes with flowered terraces and a teaspoonful of teaspoons chewing in cups, restaurants waiting for their guests to cool their breath with a pint of beer and to satisfy their hunger with unsafe dishes, shops with nothing or souvenirs only good to turn into memories.

All the winding streets of the historic centre (Lipscani, Gabroveni, Blanari, Covaci, Doamnei Streets) will show you another Bucharest, something between old and new that you will immediately fall in love with: old buildings (mostly renovated), modern cafes (where not you will lack wireless internet) and people of all kinds. The Old Town is definitely an area of ​​contrasts, with a special charm.

Opened by the Transylvanian Ion Căbăşanu in 1879, Caru’ cu Bere is one of the oldest breweries in the Capital. The name, it is said, comes from the horse-drawn carts with which the beer kegs were brought. Two of his nephews (Ion and Gheorghe Mircea) followed him in Bucharest as disciples in the place then located on Calea Victoriei, but the third brother - Nicolae Mircea - was the one who made the famous Caru 'cu bere restaurant, opened in 1899 on its current location.

He built the construction in Stavropoleos Street, in Gothic style, according to the plans of the Polish architect Zigfrid Kofczincky.

The fame of the brewery has increased due to its culinary preparations. The house specialties were horseradish sausages, beef salad and frankfurters, and black radish and olives were offered free of charge. Old wines and famous "little ones" (mititei) were served, and the beer was brought by Ghita the cellarman, directly from the barrel, without acid. 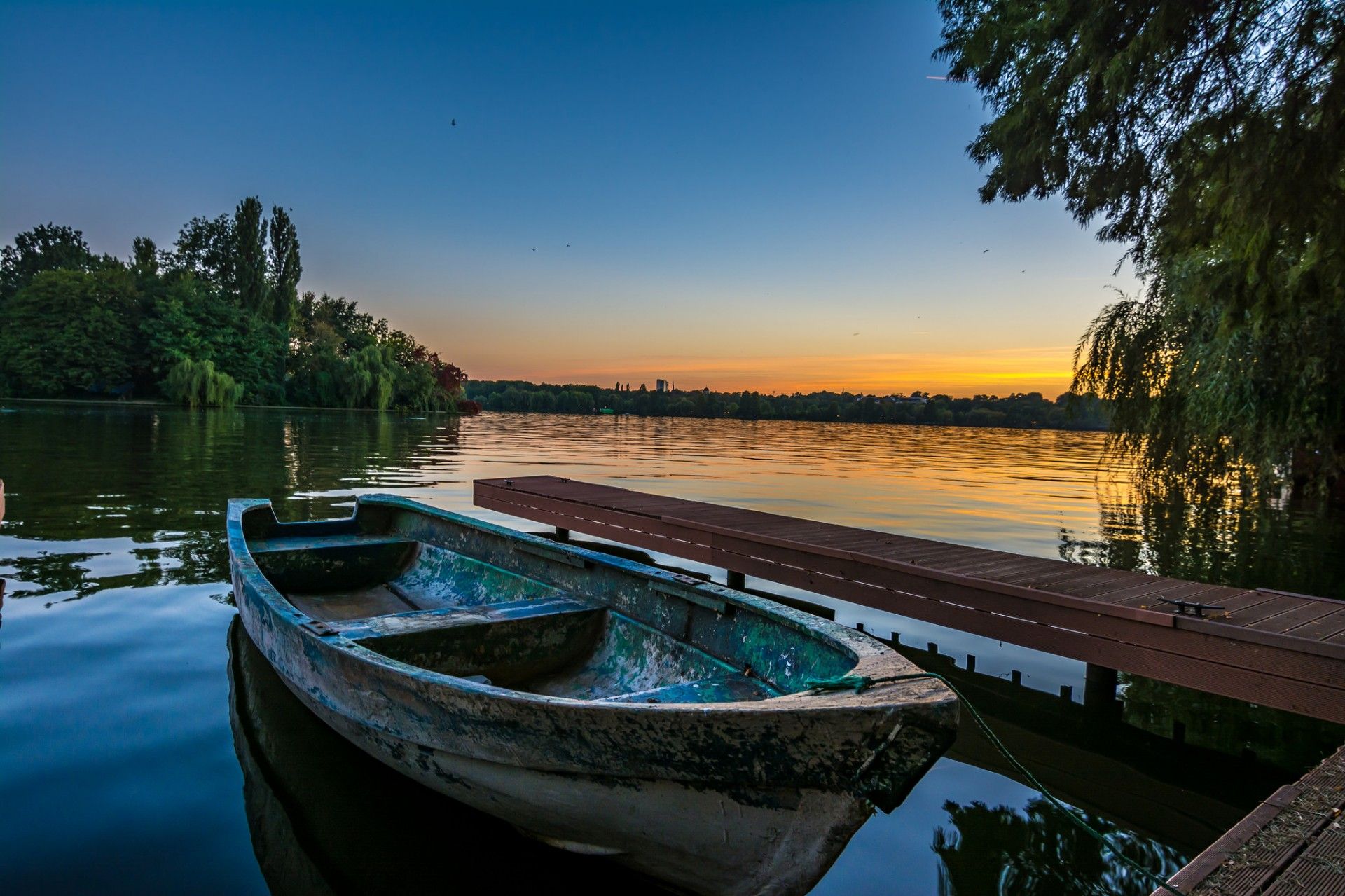 5 Best Places to Watch the Sunset in Bucharest 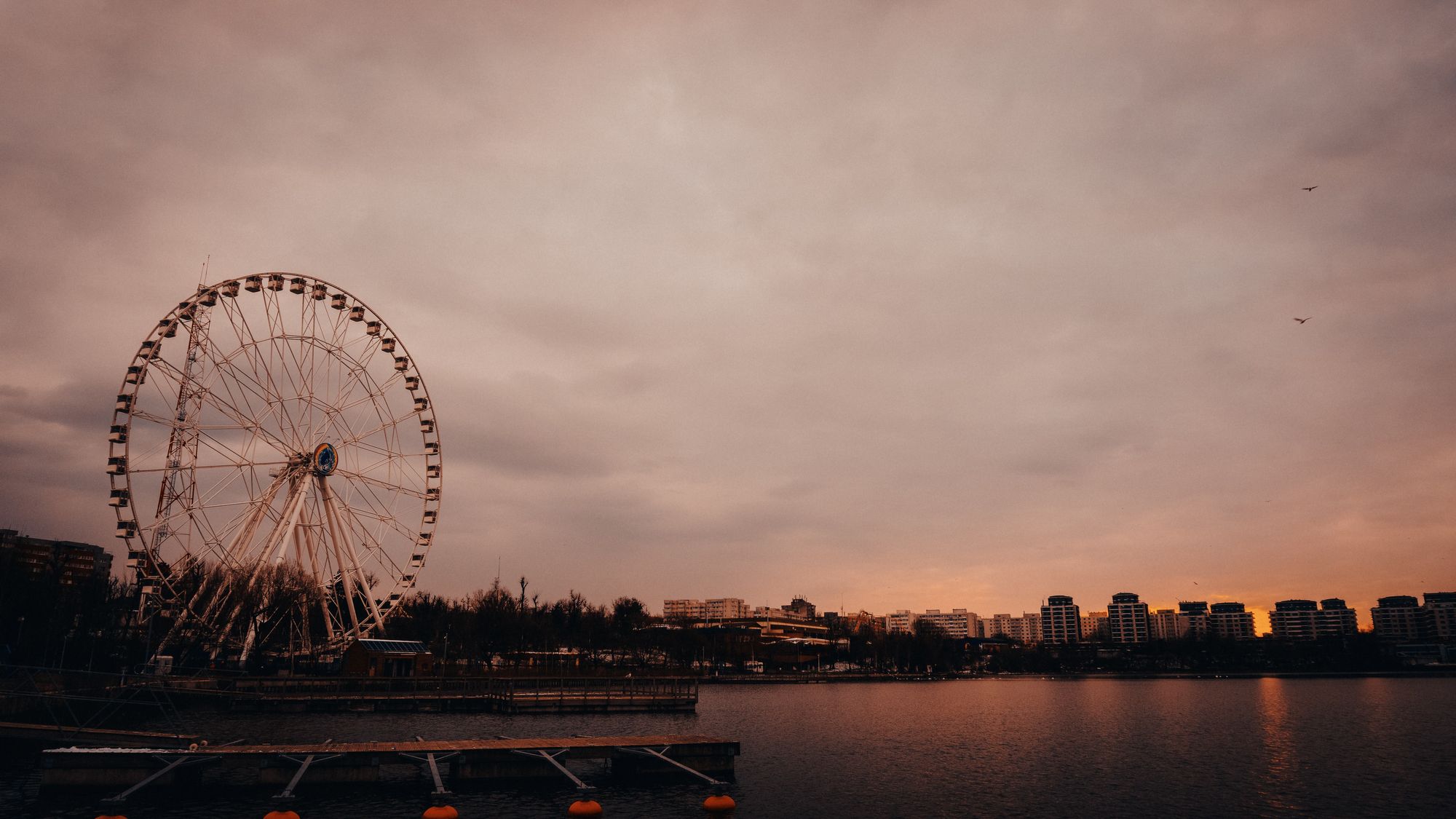 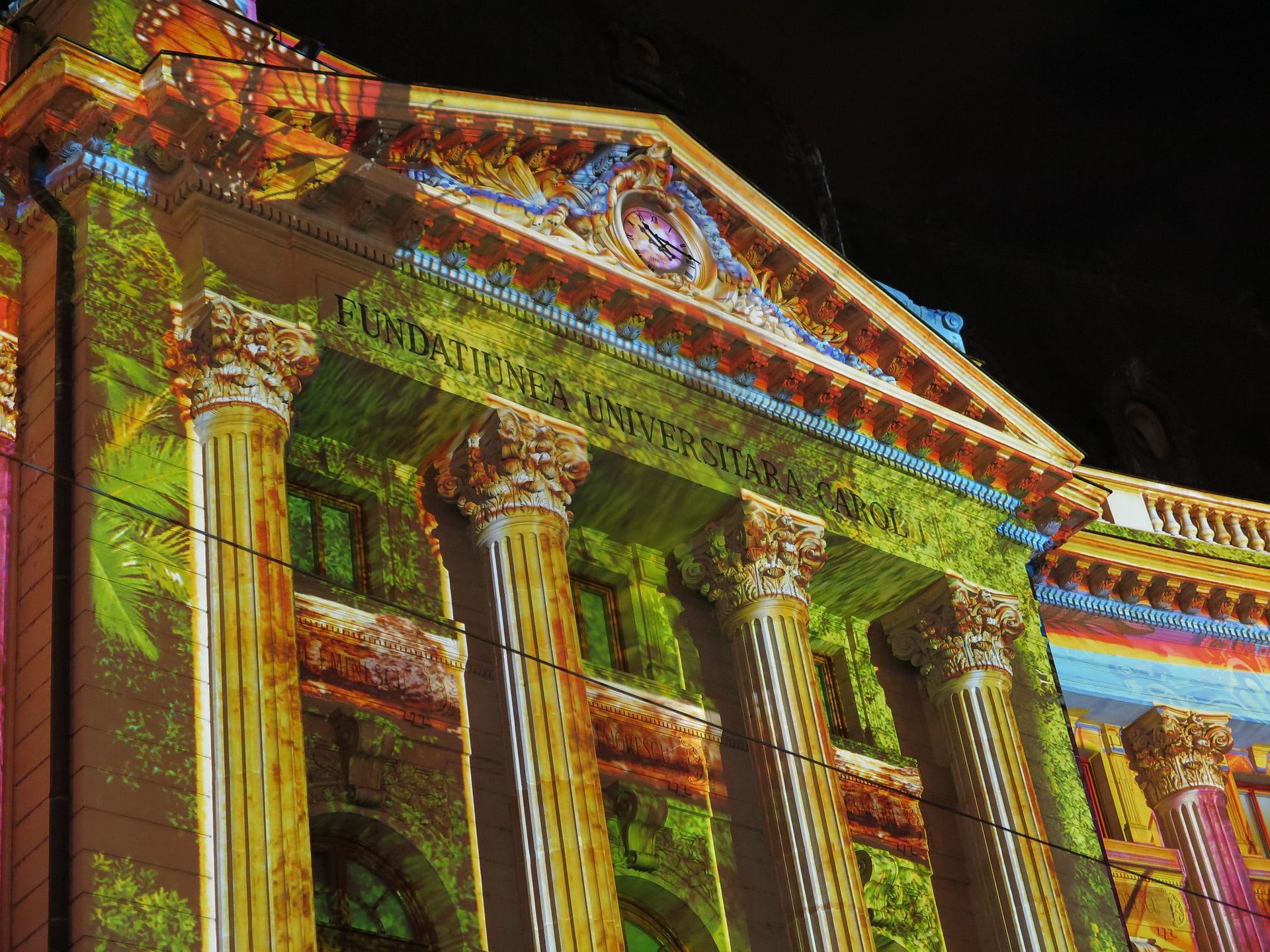 10 Best Places to Visit in Bucharest