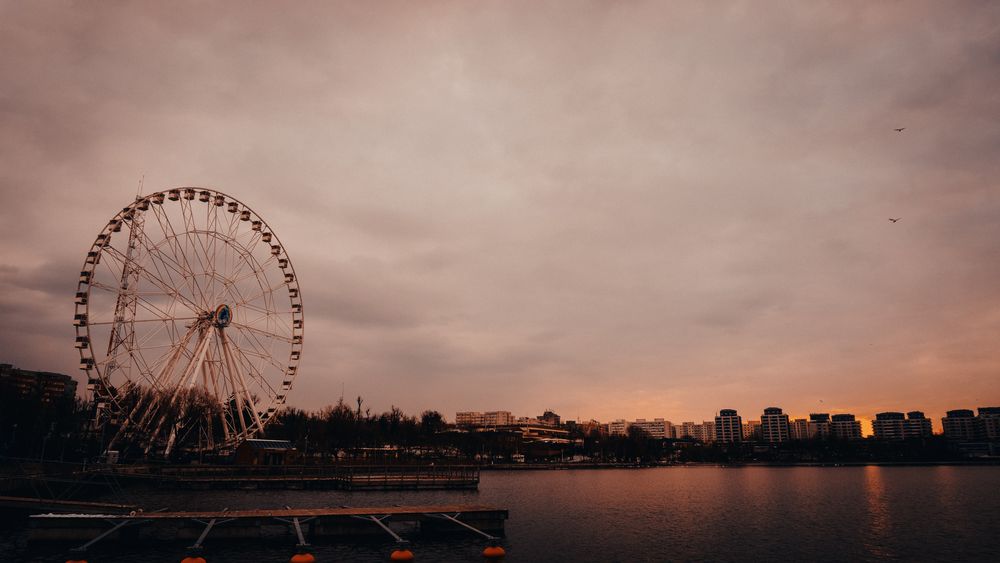 For those of you accustomed to seeing Bucharest through the lens of tourist guides or online recommendations, we have made a top 7 of the most interesting and, at the same time, hidden gems in the metropolis.

Mița Biciclista (Mița Bicyclist), on her real name Maria Mihăescu, gained her fame after she was the first woman to walk on Calea Victoriei in pants and pedalling a bicycle, which was considered inappropriate for a woman around the 1900s. This girl had a coupe car, he ate only at the Athenee Palace and took a bath dressed in a petite swimsuit, unlike the other women of the time, who bathed in their robes.

She was a chic woman who broke the hearts of men like Octavian Goga, the King of Portugal or King Ferdinand. Legend has it that this house we are talking about was received from an extremely rich lover and it has 28 rooms and 5 bathrooms. If you are ever in this part of Bucharest, take the opportunity and pay a visit, but not to Mita Biciclista, but to the architecture signed by N.C. Mihaiescu. The former home of the stylish girl is located on Amzei Street, no. 9, very close to Calea Victoriei.

Located on Calea Victoriei, the CEC Palace is a building whose construction began on July 8, 1897 by order of King Carol I and Queen Elizabeth. Before this building was built, on the respective land were the monastery and the inn "Saint John the Great", dating from the 16th century and consolidated later, during the reign of Constantin Brâncoveanu. Due to their precarious condition, these buildings were demolished in 1875.

The architect who designed the current CEC Palace was the architect Paul Gotterau. The design combines Gothic style with late 19th-century French architecture. Currently, this building operates as a headquarters for CEC Bank, the successor of the former CEC (House of Savings and Consignments). If you want to visit the objective, you have at your disposal the metro stations Universitate and Piața Unirii or the buses 104, 123, 124, 385, 336, 601 or the trolleybuses 61, 66, 69, 85, 70, 90, 91.

3. The Island on the Morii Lake

Morii Lake is an artificial lake created by the communist authorities to prevent the spills of Dâmbovița river. It has 246 ha and was built on the site of St. Nicholas Church and the related cemetery, over which concrete was poured. In the centre of this lake, the communists wanted to build a kind of island that the people of Bucharest could visit in their free time. Initial plans included shops, promenades and so on, but work was stopped in '89.

Although this island served, after the Revolution, as a destination for many concerts and artistic events, on ordinary days it is only a piece of land where willows and groves are found. However, it remains on the list of the most popular destinations for passionate photographers of unusual landscapes. To get here, you need a car, so choose the paved road and not obscure paths.

This cemetery located at the intersection of Șoselelor Giurgiului, Olteniței, Viilor and Căii Șerban Vodă, receives construction approval on the site of Baron Barbu Bellu's garden, and the works start in 1852 under the guidance of the architect Alexandru Orescu. The painter Lecca is the one who finishes the chapel and the cult objects in it.

Since 1860, the Bellu cemetery has been under the administration of the town hall and the capital council. It is probably the most famous building of this kind in Bucharest, perhaps due to the fact that here, on Aleea Artiștilor, are buried some of the most important people of culture in Romania: George Bacovia, Nichita Stănescu, Ion Barbu, IL Caragiale, Toma Caragiu , Tudor Mușătescu, Hortensia Papadat-Bengescu, George Pruteanu, Marin Preda, Florian Pittiș and others.

What makes this cemetery a more than interesting place is the story woven around tombs and monuments. There is a beautiful emerald-eyed statue made by Rafaelo Romanelli, which represents Katalina Boschott, a woman who remains shrouded in mystery. Just an enigmatic inscription that can be read on her grave: 'Cet animal de médecin m'a tuée! Herkulesbad-Mehadia 11-12 August 1906 '. (That damn doctor killed me!). Her death has not been explained in 100 years, and solving the mystery always leads to the jealous wife of Katalina's lover.

The tomb of the Poroineanu couple, who loved each other so much, is also marked by a statue signed by Romanelli's talent, which tells them the emotional story: the two discovered that they were brothers and committed suicide.  Karl Storck's funerary art is also a point of interest, excelling with the Gothic chapel Alexandru Costescu.

To get to Bellu Cemetery, you have several options: Eroii Revoluției metro station, buses 116, 232, 323 and trams 11, 12, 17, 19. And the cemetery website is well developed, providing a detailed and interactive map of the tombs.

Melik House is located on Spătarului Street, no. 22 and is the oldest house in Bucharest. It was built in 1750 by the Armenian Hagi Kevork Nazaretoglu and currently houses paintings by Theodor Pallady, over 800 drawings dating from the period when the Romanian painter did his apprenticeship in Paris.

Also, you can admire the 1270 collectibles belonging to the Serafina and Gheorghe Răuț family, among which are the works of artists such as Lubin Baujin, Edmond Aman Jean, Carolus Duran, Camille Corot, or Dutch, such as Jan van de Capelle . If you want to know more details about this house and the museum it hosts, you can send an email to [email protected] or call the phone number 021-2114979. You can get here by bus 311, trolleybuses 66, 69, 70, 85, 90, 92 and tram 21.

On March 19, 1851, Prince Barbu Stirbey ordered the establishment of the "Princely Pensioner for Girls", known today as the Central School in Bucharest. The purpose of this institution was to educate noble girls, but this is not the reason why the school gained notoriety.

Towards the end of the century, the father of Romanian architecture, Ion Mincu was commissioned to design a new headquarters (now in the process of restoration). As it is written at the entrance, the works began in 1890, and the result proved to be spectacular. I would like to point out the ceramic belt that adorns the façade and the interior portico, a true proof of architectural virtuosity.

Also, the building is in the shape of a quadrangle, in the centre there is a garden overlooking a lot of large, bright windows, designed in the neo-Romanian style.  On the facade are painted portraits of great historical personalities, such as Lady Clara, Elena Rareș, Lady Chiajna, Carmen Sylva and Elena Cuza, a real set of examples for future students of the school.

Among those who studied here are the writers Zoe-Dumitrescu Bușulenga, Lucia Demetrius and even the actresses Ana Cartianu, Oana Pellea or Smaranda Gheorghiu, the famous feminist activist. If you want to visit the school, the address is 3-5 Icoanei Street, Sector 2, Bucharest. You can get here by trolleybus (79, 86), tram 5, bus (133, 136, 226, 385) or by subway (Piața Romană station).

If you ever visit Carol Park and you have enough time to discover a less common tourist attraction, with a medieval look and necessarily built of red brick, you do not have to go very far: in the middle of the park is the Water Tower built by architects Ștefan Burcuș and V. Stephănescu in 1906, on the occasion of the 40th anniversary of the accession of Carol I to the throne, on which occasion the Romanian authorities ordered the organization of the famous Romanian General Exhibition.

The castle we are talking about was intended to be useful, in which a water tank will be housed, but it never fulfilled its purpose and remained more in history due to the fact that it takes over from the architecture of the Țepeș Palace from Poienari, Arges county. Those interested can admire this construction on Candiano Popescu Street, No. 6, Bucharest.

Unfortunately, access to the castle is allowed only twice a year, for security reasons (since 2004, the Castle has been the headquarters of the National Office for the Cult of Heroes): Heroes' Day (Ascension Day) and Army Day (October 25) . However, the visit will be a memorable one: in addition to the unmistakable architectural style, you will also enjoy a beautiful view of Carol Park and you will also be able to visit the Mausoleum and the Tomb of the Unknown Soldier.

For those who suffer even now at the thought that this House of the People does not really belong to the people: do not be sad, dear ones. Fortunately, right in the heart of the esteemed establishment there is the MNAC terrace (National Museum of Contemporary Art). It's true that you have to pay an entrance ticket worth 5 lei and cope with the test from the metal detector, but the view is worth all the trouble.

In general, those who come to this terrace follow the following itinerary: order at the bar, sit at the table, but because they do not feel like sitting down when they have such a view, they get up and start walking. I'm not telling you how excited the waiters are who can't find their customers where they last saw them!

Unfortunately, although the view is beautiful, you can't help but notice the discrepancies in texture and material in the construction of the People's House, so we suggest you stay inside, where the music is good, you can read one of the contemporary art books that are available and enjoy the peace.

Here you will find only a few varieties of drink, most of them being non-alcoholic. In terms of food, things have improved. In general, those who reach this terrace have previously passed through the MNAC and admired several exhibitions, during which time they were hungry / thirsty. If you are interested in visiting this terrace, you can find it on the 4th floor of the MNAC in Casa Poporului, the entrance from Calea 13 Septembrie, wing E4. For those who come by car, bad news: although there is plenty of room for it nearby, you will not be allowed to park it just a few blocks away. Otherwise, good cheer and curiosity!

A monumental building in the historic center of Bucharest reopens its doors after a quarter of a century to host Cărturești Carousel.

Located on Lipscani Street, at number 55, the bookstore is spread over six levels totaling 1000sqm. Cărturești Carousel is an experiment of cultural living in the old center, offering a space for reading, socializing and artistic exploration of the heart of the city. With a bistro on the top floor, a multimedia space in the basement and a gallery dedicated to contemporary art on the first floor, the bookstore is preparing to tell a new story on a street with a vibrant commercial tradition.

The elegant 19th century building came into the possession of the famous Chrissoveloni family of bankers in 1903, and during the communist period it was confiscated and transformed into the Familia store. After 1990, the building was recovered and rehabilitated by the current owner, Mr. Jean Chrissoveloni, and now it comes to life through an innovative arrangement, but attentive to the historical substance, signed by the architecture office Square One.

Under the title "Enchanted Land" we tried to create an amusement park for children and adults, on several hectares being mounted various entertainment facilities that to be in tune with the title bear names inspired by Romanian fairy tales: "The Dragon with 7 Heads", " Handsome Boy ”or“ Master Bird ”. Next to all these installations are mounted panels that display the technical data, as well as rules of use. There are also several maps in the park that help you navigate: where you are and where the other attractions are.

The rates start from 5 lei for Carousel/adult, 10 lei for Chains/adult, 15 lei for Roller Coaster/adult up to 20 lei/adult for Sky Wheel (Ferris Wheel).