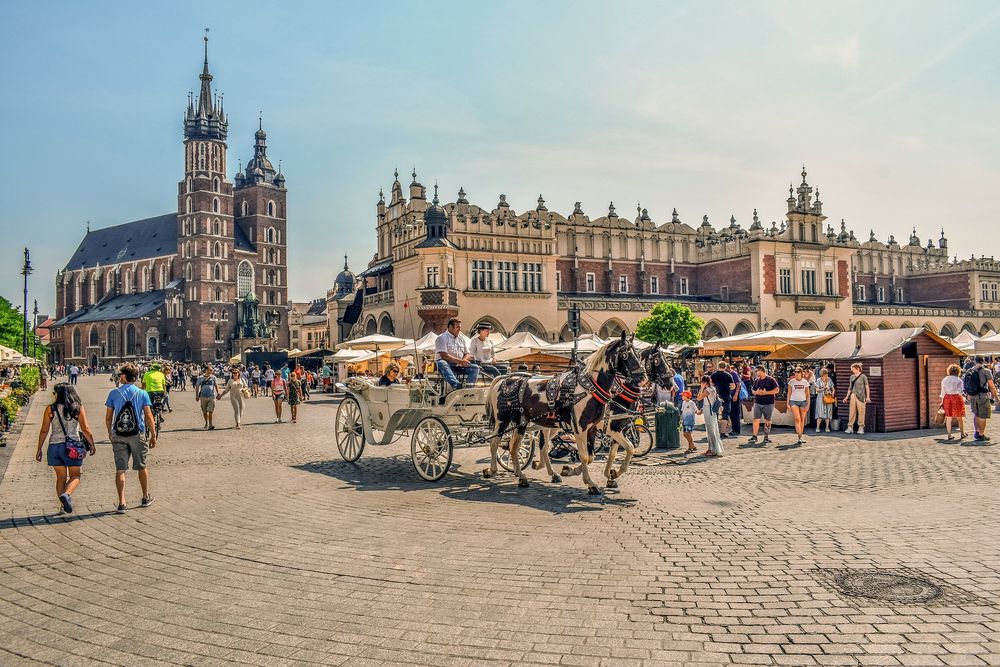 Kraków's inhabitants suffered enormously during the Second World War, but its buildings were spared the destruction suffered by many other Polish cities, leaving almost intact medieval area of ​​the Old Town: part of the Universal Heritage UNESCO, it includes a castle, a cathedral and one of the largest medieval squares in Europe.

The city is beautiful like a postcard, and if your steps take you beyond the historical center, on the other side of the Vistula and towards the marginal areas, you will find neighborhoods and districts that tell fascinating stories: about Jewish history, about life in communist regime, about the new life that begins to be breathed into this old city.

The second largest city in Poland, Krakow is a top destination for tourists looking for elegant medieval architecture, which includes in its neighborhoods and districts a rich history with one of Europe's most tumultuous moments.

After the Holocaust, this part of the city remained "like a ghost town," mostly abandoned, except for a community of artists, attracted here by the low rents. But "everything started to change quickly after Schindler's List (the production from 1993 which was filmed here)". A wave of visitors and investment followed, and the creative and bohemian spirit of the area was revived. Two former tram depots were transformed into an engineering museum and a restaurant, Stara Zajezdnia; a former office block from the 70s became Nova Resto Bar, a very trendy place; and the vacant lots were requisitioned by clusters of food trucks.

Located very close to the Old Town, Kazimierz is one of the most central districts of Krakow, but it still manages to slip here and there, and some green eyes. On sunny afternoons, people flock to the green garden of the Mleczarnia brewery or the quiet Mehoffer Garden (named after the local artist who designed it), hidden behind a museum, among the blocks.

Kazimierz has several museums dedicated to jew history of the neighborhood, but Zydowskie Muzeum Galicja (Galicia Jewish Museum) - succeeds to best combine the past and the present. A chic space, which includes a cool cafe and a bookstore with bilingual books, it has a permanent exhibition with modern photographs that attest to what is left of Jewish culture in the region.

If you want to take a break, choose Ulica Szeroka, a square with trees in the center, lined with cafes open right on the cobblestones. Check out two restaurants, Ariel and Ester, where the best klezmer music in town is played. Go into the Remuh Synagogue, which survived the Nazi occupation and remains the only functional synagogue in Krakow.

Podgórze - situated on the right bank of the Vistula River

This district has the most beautiful view of the city. Situated on a hill, Wawel Castle rises above the Old Town, with on the left a former quarry full of trees, which will soon be transformed into a park. Behind it is a cluster of hills, but on a clear day it is well visible far, up to the Tatra Mountains, which form the border with Slovakia.

Krakow has four man-made hills, all of which have rather unclear origins. The one I'm standing on now, Krakus, is named after the mythical founder of the city. It seems that it was the work of the ancient Slavs at least a millennium ago.

Located on the opposite bank of the Vistula from Kazimierz, the area has, by comparison, the air of a suburb. The streets are bordered by houses that look like villas and neighborhood restaurants. It is the most international street corner in Krakow, in terms of culinary offer. You can find Italian, Vietnamese, Basque food.

15 years ago there was nothing here. But in 2009, the pedestrian bridge was inaugurated and everything changed. Thanks to Father Bernatek’s Bridge, more and more visitors also arrive south of the river. Under the Nazi occupation, the Jewish Ghetto was located in Podgorze, and the neighborhood honors its historical Plac Bohaterow Getta (Heroes' Ghetto Square), with a powerful memorial: 33 oversized, empty metal chairs. Nearby, a pharmacy whose owners sneaked food and information to the residents of the ghetto, Apteka Pod Orlem, has been transformed into a museum. As well as the Oskar Schindler enamelware factory, located nearby in Zablocie.

On the river bank, another piece of history found a new purpose. The massive Flotel Forum, built in Brutalist style, opened in 1988. After it was closed in 2002, its rooms were abandoned, and now the ground floor is leased to Forum Przestrzenie: designed as a bar, club and event space, it hosts parties animated in the hotel's former kitchen and conference rooms.

Nowa Huta was built between 1949 and 1951, mainly to provide housing for steel workers. It is one of only two cities in the world designed and built in the socialist realist style - that typical Soviet aesthetic, defined by massive, intimidating buildings that seem to beat the drum and make communist propaganda.

"The city was a gift from Stalin", it is said. In fact, it was a kind of showing off. Paranoia being in full bloom, 250 bunkers - shelters in case of bombing - were also built under Nowa Huta. Some of them can be visited now.

The city was to be organized in the shape of a wheel, with Plac Centralny in the center, but only half of the spokes ended up materializing. One of these, Aleja Róż, the Champs-Elysees of Krakow, is a wide street with exclusively pedestrian sections, dotted with small lawns and blocks that dominate you. Also here, there used to be the largest statue of Lenin in the world. Now, it followed the footsteps of the communist regime, but the steelworks that bore the same name still endures.